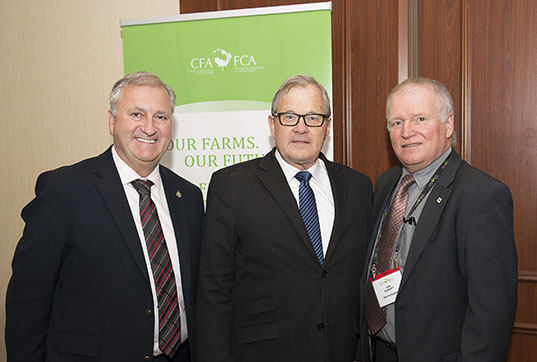 “Farmers in all parts of Canada recognize that by building on each other’s strengths, we can not only meet the challenges we face today, but lay the foundation for an even more resilient sector going forward,” said Ron Bonnett, CFA President.

Among the other AGM speakers were John Barlow and Luc Berthold, the Conservative party agriculture critics; Alistair MacGregor, the NDP’s agriculture critic; and Mike Hoffort, President and CEO of Farm Credit Canada. Dr. Lois Morton, of the North American Climate Smart Agriculture Alliance, spoke about the application of climate science to the agriculture and forestry sectors.

In a special session prior to the AGM, CFA held a symposium on mental health in agriculture. Attendees heard from farmers, health and safety experts and leaders from several organizations that offer mental health support to agricultural communities. CFA announced a new partnership with the Do More Ag Foundation that will introduce a new award for best practices in mental health – the Brigid Rivoire Memorial Award – and a research fund to support a stronger knowledge base in this area.

Founded in 1935, the Canadian Federation of Agriculture is the country’s largest national general farm organization. Its members include provincial general farm organizations, national and inter-provincial commodity organizations – representing over 200,000 Canadian farmers and farm families through its members. CFA works on behalf of Canada’s farmers to ensure the continued development of a viable and vibrant agriculture and agri-food industry in Canada