OTTAWA, June 21, 2017 – Leading up to the federal government’s summit on June 22-23 on creating A Food Policy for Canada, the Canadian Federation of Agriculture (CFA) today released a summary report from a collaborative session held earlier this month at which a range of stakeholders explored how Canada can work toward successfully implementing a national food strategy. 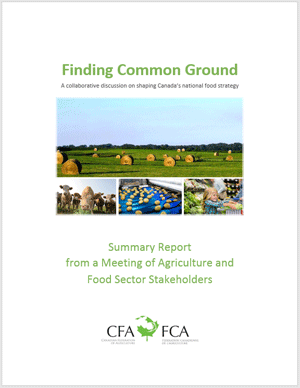 CFA convened a meeting on June 5 with participants from across industry, civil society, indigenous groups, academia, and a number of government departments to share their thoughts on the four key policy themes identified by Agriculture and Agri-Food Minister Lawrence MacAulay in last month’s announcement of national consultations:

“CFA believes that to move forward on creating a national food strategy, both long-term vision and short-term actions are required,” said CFA President Ron Bonnett. “Our meeting earlier this month showed that many organizations share this view. We noted areas of consensus on issues such as food waste, food literacy, the need for science-based policies and more ways to evaluate our progress. We are eager to continue our conversations in the months ahead. Canadian farmers are at the foundation of the agri-food value chain and we’ll be certain to define and emphasize the vital role farmers must play within a National Food Strategy throughout the consultations.”

CFA is pleased to see that the food policy consultation web site, which includes an online survey and links to previous initiatives from both governmental and non-governmental groups, refers to the Towards a National Food Strategy document published in 2011 by CFA.

“Building on the work that’s already done in this area will be essential to success with such an ambitious timeline for the policy’s development,” said Bonnett.

“Farm leaders have urged the federal government to take a more coordinated, whole-of-government approach to food-related policy issues, since there are many areas where laws and regulation overlap, such those linked to trade, the environment and health,” said Bonnett. “Policies must be better aligned across departments if we are to meet the goal set out in Budget 2017 to increase agri-food exports to $75 billion by 2025.”

A focus on better coordination is also necessitated by the fact that agriculture and food policies are a shared responsibility among all orders of government. With this in mind, CFA looks forward to exploring the topic at its annual industry-government roundtable to take place in conjunction with this summer’s meeting of Canada’s federal, provincial and territorial agriculture ministers.